The question is did those five weeks of training help me prepare for Spartan Race day? To be honest, YES it did. There are a few things I would have liked to improve on that is for sure. The boot camp and crossfit training really helped me with the obstacles and Tae Bo and running helped with the steady breathing and running. Things I didn’t train for! running in mud, water or sand. Those elements add about fifteen pounds per shoe or at least if feels that way. Shane was pretty laid back but the rest of us were a little nervous. I did wear an ankle brace during the race but by the end I was pretty much hobbling and it was painful. 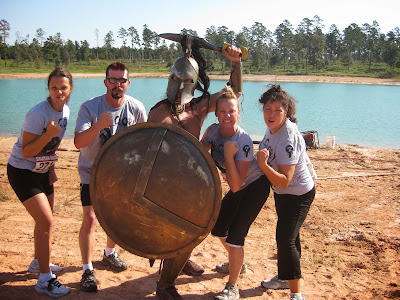 We started off running on sand and then into the water and we came out and jumped across fire.

I wanted to get some footage of the actual race but it just wasn’t possible because it would too hard to carry a camera while doing obstacles. Our team was hoping to stay together but we didn’t. Cameo and I got caught up in the bottle necking of the obstacles. We made our way up a hill and to a half wall we had to jump over and the rest is frankly a blur!

I remember a cargo net wall, a huge vertical wall that thankfully a gentleman helped me at the top to get over. We did crawl under the barbed wire and under a tarp that covered a nice muddy pit. We did some balancing on 2 * 6 boards. I remember jumping over lots of zig zag ropes, lots of sand, mud and wooded trails! I did well on the wall that you had to climb across horizontally.

Then we had to go over some hay barrels? I think that is what they are called. I did not make it to the top of the wall of crisco! That stunk. I made it half way and couldn’t get that darn knot in the rope so I had to drop and do 20 push ups. I didn’t make the spear throwing target so I had to jump up and down 20 times on a tire. The guys at the end did not clobber me, thank goodness!

When I was running through the pain there was what they call a sweeper and he hits you on your bottom with a stick if you are walking. The last thing I wanted to do was walk so believe me I was hobbling, pretending to run as much as possible!

In the end I was the last one to finish on my team with a time of one hour and 12 seconds. I never got to wave good-bye to Keith. lol – His team did in fact win over ours. I could not have asked to race with a better group of people. 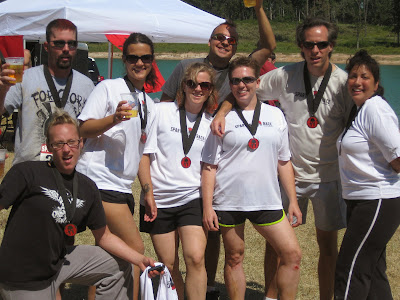 I’m so glad my mom got to come and watch us race. I’m really pleased as punch that Colleen and Shane made the haul from Austin to race on our team. This is a race that if you did it, you will NEVER forget it!